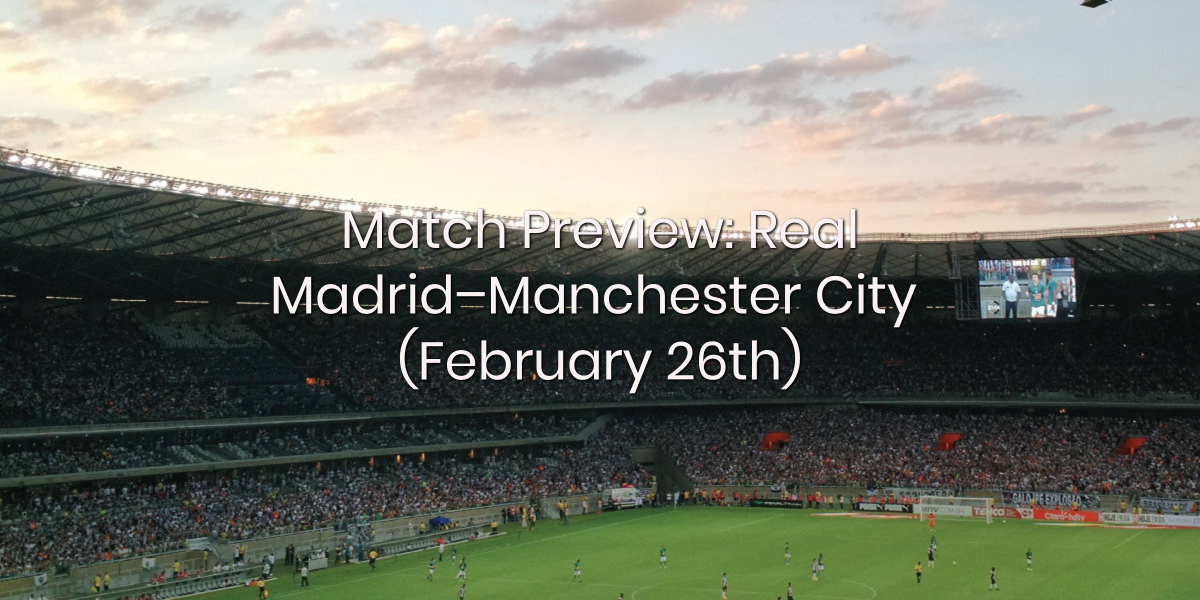 Arguably the most highly anticipated fixture on the UEFA Champions League schedule will see Real Madrid tackle Manchester City in a massive showdown in the Round of 16. The first leg of this exciting tie will take place at the Santiago Bernabeu on February 26.

After enduring a slow start to their European campaign (D1, L1), Real Madrid have roared their way back into contention for the last 32, winning three of their subsequent four Champions League matches (D1). Los Blancos have now sealed a place in the elimination phases in all 24 of their group-stage appearances in the competition, which is an absolute record.

The last time La Liga giants took on City in the Champions League knockout stage was in 2015/16, with the Spanish side running out 1-0 aggregate winners. Moreover, the 13-time European champions have avoided defeat in all four of their European head-to-head encounters with City (W2, D2), with both of their wins across those meetings coming via a single-goal margin.

Zinedine Zidane's men also boast an intimidating European home record for the past decade. They've suffered just four failures in their last 49 European fixtures at the Bernabeu (W37, D8, L4), although three of those defeats have come in the previous nine such matches (W3, D3, L3). Another good-looking sign for the home fans is that Los Merengues have failed to reach the Champions League quarter-finals only once in the last nine seasons. During that nine-season spell, Real Madrid have outplayed all four Premier League sides they've come across in the knockout stages.

The moment that the likes of Atalanta, Dinamo Zagreb, and Shakhtar Donetsk appeared next to the City's name in Group C, it has become clear that the Premier League giants will find little trouble securing a spot in the Round of 16. And everything has gone smooth for Pep Guardiola's men, who finished top of the section with four wins and a pair of draws.

Wealthy Manchester City owners have made heavy investments to assemble a group of players able to bring the Champions League crown to the blue side of Manchester. However, all of their previous efforts to reach the competition's final have come a cropper, with the Citizens failing to bypass the Round of 16 in three of their last six attempts.

However, the first round of the Champions League knockout stage will likely evoke memories of extreme joy in the hearts of the Blues' fans. Indeed, in 2018/19, Manchester City swept Schalke 04 aside with an outstanding 10-2 aggregate triumph in the last 16 before being bowed out on away goals by Tottenham Hotspur in the quarter-finals.

Although he has suffered an injury setback in the build-up to the Supercopa de Espana, Karim Benzema will return to be a protagonist for Real Madrid against City. The French striker has racked up four goals and two assists in the group stage, contributing to 42% of his team’s total goals in the competition. Zidane will hope to see Luka Modric returning to his best to boost Real's hopes of dumping City out of the competition. The Croatian midfield has scored once in Europe this term, but he is yet to provide an assist to his colleagues.

Raheem Sterling (5) and Gabriel Jesus (4) lead the way for the traveling side in Europe, but Kevin De Bruyne, who is enjoying a stellar season at the Etihad, is expected to orchestrate every single movement Pep Guardiola’s players will make at the Bernabeu. The Belgian is a top-drawer playmaker able to dictate the pace of the game and create chances to his teammates out of nothing, which makes him particularly dangerous to Real’s shaky backline.